Stripped of yet another bragging right.

I am no longer able to brag self-righteously about how my kid has never shit in the tub.

Because she did.  This very evening.  Half diarrhea, half 40 year old man toilet clogging turd.  Right in the tub, with no warning save one tiny grunt and a duck fart.  And then we all died.  The end.

I'd love to describe it to you in painfully uninteresting detail, but all I remember saying is "OH MY GOD I AM CATCHING POOP IN MY HAND!" and also "GET A DIAPER ON HER ALREADY GAAAAH!"  I mean seriously, I can't think of any thing worse than scooping up a turd with your hand while suffering raging morning sickness.

First the whole pee cup thing, and now this? If the trend continues, what am I going to say at business events when they do the "tell us something interesting about yourself" ice breaker?  I have no discernible talents, no athletic ability, and no hobbies besides Baby Gap, and now my daughter shits in the tub.  And I'm totally screwed if my mouth stops doing this:

I've got nothing to talk about except poop - my lack thereof, and Olivia's abundance.  I'm going to bed.  The end.
--

One Year Ago: It Is Entirely Possible That I've Lost My Marbs
Two Years Ago:  Motherhood Maternity is a Whore

I had my first OB appointment last week.  It was mostly uneventful, but started off with soul-crushing disappointment.

I am a pretty amazing pee-er.  I mean, it takes some amazing skill to have a HUMAN in your stomach, sticking out like a watermelon, and still be able to aim your pee stream into a small sample cup every week.  It was a major source of pride for me to pull up a full cup with a dry hand.

Naturally, I was excited to nail my first pee of this pregnancy.  This will be my last pregnancy and I'd be lying if I said I wasn't up for the challenge of peeing in a cup with TWO HUMANS in my stomach.  I am a winner, after all, and I require many challenges to keep my killer skills fresh.  Bring it, multiples!  I will pee around your collective asses!

Imagine my surprise when I arrived to find a whole new setup in the OB restroom.  Apparently, the normal, small, skill requiring pee cups are reserved ONLY for those dirty bitches who have an infection.  And they're serious about this, because the sign was in all caps, like this:

THESE AWESOME LITTLE SKILL REQUIRING CUPS ARE ONLY FOR YOU DIRTY BITCHES WITH AN INFECTION. KTHXBAI.

It is possible that I'm slightly off on the wording a bit, but it was almost exactly like that.

So now I have no way to boost my self esteem, besides showing a doctor my vagina on the reg again (which, come on - it does make me feel pretty and popular).  Now?  I have to pee into a giant cup which requires no skill whatsoever.

My appointment was uneventful.  Showed my vag, bewbies were fondled, dignity questioned.  I had to take everything off for my exam, and of course I sounded like a complete pistachio when I was all, "everything?  Because I have this fear of being naked when you come back and you'll have told me to only take off my pants."  And she was all, "uh...everything."

I go back in a month for my 1 hour glucose and my NT scan.

I got a prescription for Zofran, and guess what?  It doesn't do shit for me.  As in: it doesn't help my All The Live Long Day Sickness, and it does not allow me to take a much needed dump.  So...if you need me, you'll find me lying in bed, most likely.  Much like Brian Wilson.  Please don't take offense when I dry heave in your face.

You Think That You're Glowing

But you have been ho-ing, and now you're pregnant.

It's funny because it's true.

My Uterus, The Clown Car

Forgive me if this post is...well, stupid. I have to post, since it has been a week. Plus I stayed up past my Old Hag 9pm Bedtime to watch LeBron James redefine the term Cleveland Steamer on national television. Those are thirty minutes of my life that I will never get back.

I'm not sure how appreciative I am supposed to be of the whole miracle of identical twins after my Frozen Embryo Transfer, but if it will piss you off to hear me complain about being sick?  Then stop reading now, and have a nice weekend, and don't leave drama in my comments.  Kthxbai.

OMG I'M SO SICK.  All day.  Every day.  I'm burping and gagging all day.  And the most tragic part about it is that it's really screwing up my Car Concerts.  I was really killing Ants Marching the other day, until the part where it's all "take these chanceeeeeeeeees" and right in the middle of chanceeeeeeeeees I gagged so hard that I put on my turn signal to pull over so that I could vomit on the side of the turnpike.  It was a false alarm.  Perhaps my own horrible singing makes me sick?  And I'm blaming pregnancy for no good reason?

I can't even play my beloved Wii Tetris Party anymore, because watching the pieces spin around makes me all Barfy McYackerson.  And I'll try to be humble here, but I love Tetris because basically when it comes to Tetris?  I wake up and just piss excellence.  I happen to have snapped a photo as proof, which Mark said I was not allowed to put on the blog.

Here is the picture that Mark says I'm not allowed to put on the blog: 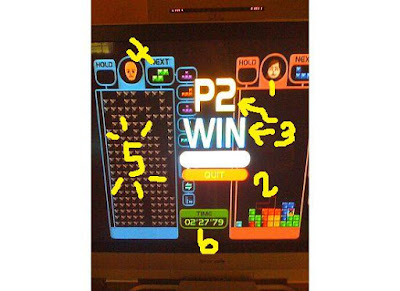 Please note the labels, which can be defined as follows:

2. Nearly clear board, even though the game is over. The sign of a Tetris Master.

5. Completely effed up board, caught on film.  No wonder Mark Mii looks so sad...

**Allison pointed out in the comments that I forgot #6!!!  My most sincere apologies!**

6. It took Mii Jennepper only 2 minutes and 27 seconds to beat Mii Mark.  I'm quick about my excellence pissing.

But woe.  I cannot play Tetris because I might vomit on myself.  Isn't that a sad story?  I bet you are all grabbing your tissues.

In less self pity type news, I had another ultrasound today to check on my subchorionic hematoma.  Still there!  It looks big, too, but nobody seems all that concerned about it.  And since Google tells me that I can't do anything about it, I'm just pretending it isn't there.  Except when I wear pads EVERY FREAKING DAY so that I don't ruin my good skivvies and work pants by some sort of surprise gush from my clown car uterus.

The doctor and the ultrasound tech both saw two yolk sacs.  I made the mistake of Googling a few things related to twin pregnancy - I found the belly pictures to be very disturbing (sorry, but they are), and I also found all sorts of really scary risks associated with identical twin pregnancies.  I don't really want to get into it now, but apparently it is a good sign that there are two yolk sacs.

I've officially graduated from the Reproductive Endocrinologist.  Not sure what I'll do when I can't read unlimited issues of Conceive!  First OB appointment is next week, because all signs point to me seriously being pregnant, like for real no fucking kidding around.

I wonder if one of them will look like Danny DeVito

Holy shit, you are really not going to believe this: 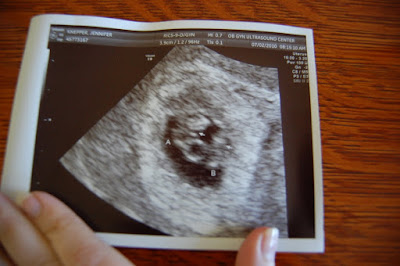 That right there?   Is a picture of our IDENTICAL TWINS.  Both measuring 6 weeks, 1 day with perfect heartbeats.

Hot diggity damn.  If there was one thing I did NOT expect, it was, "there are two heartbeats; you're having twins."  I wonder if one will come out looking like Danny DeVito? 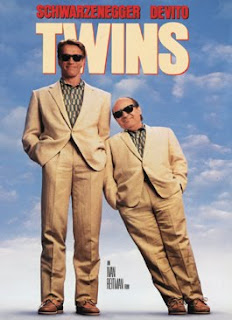 I also have a subchorionic hematoma, which is the asshole responsible for all of this bleeding bullshit. (And I mean really, are the blog commentors ever wrong?  Never, I say.)  I go back next week so that they can take another look at it.

But for right now?  Excited.  Nervous.  Holy hell.  Now I finally have a legitimate excuse to eat for three.

Abstract Art In My Pants

Doesn't some guy shoot paint up his ass and let it all blow out onto a canvas and sell it as art? I mean, if there is a market for that, then do you think there might be a market for the murder scene that appeared in my underwear over the weekend?

Ok. Maybe first trimester bleeding isn't art-y.   It is, however, murdery.  Which makes me wonder if I'm going in the total wrong direction with the art thing, because perhaps I should focus on TV?  CSI: My Underwear?  Law and Order: Underwear Unit?  Or possibly reality TV: My Big Fat Asshole Uterus!

Friday, I ended up going to the doctor to get a repeat beta.  The nurse told me I could have an ultrasound if I wanted, even though it was probably too early to see anything at all.  All I heard was ULTRASOUND which is basically like blowing into my ear and hand feeding me fancy chocolates on a deserted beach.

So I had my ultrasound and we could see what might be the gestational sac, but might also be free fluid.  Or a gerbil for all we could tell.   My beta on Thursday was around 5000, and Friday it was 6244.  So far, not a miscarriage but for added fun: hey!  It might just be too early for your number to go down!  Enjoy your waiting!

Friday was mostly just brown spotting and I was starting to feel a little better, especially after all the comments on my last post.  But Friday night, while sitting on the couch and watching True Blood (I wish I was kidding) I felt a giant gush and it was...gross.  Red.  Gross.  Gross.  Gross.  I'm surprised that vampires aren't outside my house right now trying to get in on all this blood action.

Saturday was miserable.  I had cramps and heavy bleeding and it was awful.  That's all I really have to say about that.

Sunday, the bleeding was almost nonexistent.  No cramps.

My ultrasound is Friday.  I'm distracting myself with baybee cuddles, cookies, and Wii Tetris Party.  I apologize for my lack of updates - I seem to be suffering from soul crushing exhaustion.  I've been working on this post since Monday.

I'm completely surprised at my reaction to this situation.  When I imagined this happening, I imagined being a red-faced snot-nosed tear factory.  Really I'm just tired of my own complaints and ready for this to either be over, or to move on, or whatever.  I have a lot of beer and coffee to drink if I'm not pregnant, is what I'm getting at.

If I am still pregnant, I'm guessing it's a boy. Since it's being such a pain in the ass.

One Year Ago: Reflux Redux
Two Years Ago: Out.  Like the Fat Girl in Dodgeball