It counts as a C-Section.

It is my belief that these babies are eating my brains to stay alive.

I pointed this out to someone (my boss) at work today, and he thinks that I'm probably carrying Renesmee-like, half vampire half human fetuses.  It really makes sense if you think about it.

And if you read the Twilight series.

I did clarify that it counts as a C-Section.  You know, if these babies gnaw their way out of my uterus of doom using their razor-sharp teeth.  I'll probably have to have Robert Pattinson suck on my neck and turn me immortal, but at least I'll get 8 paid weeks off work instead of 6.  Gotta think positive.

Like when I puked at my desk at work this week.  I mean, it was embarrassing and it really pissed me off.  But also?  If I hadn't?  I probably wouldn't have had room to eat that giant bowl of homemade apple crisp before bed.  Sure, it gave me raging heartburn but it was damn delicious.  Sunshine, rainbows, Robert Pattinson, etc.

Here's some pictures of me at 18 weeks.  Twins on the left, Singleton on the right.  I think I look pretty much the same so far.  But holy hell!  You can definitely tell that I have a nicer camera now! 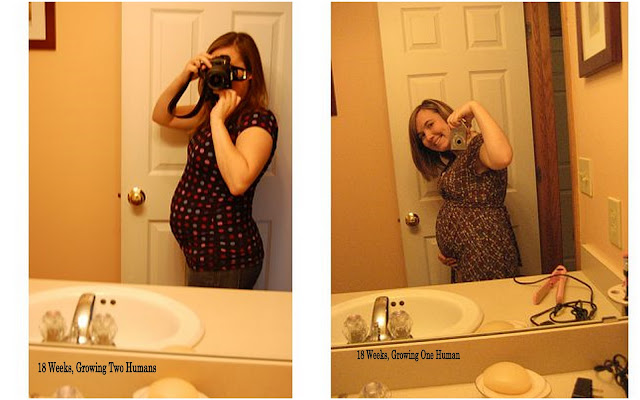 At 18 weeks with Olivia, I had gained 8 or 9 pounds.  I've gained just under 15 this time.  I think I'm on the verge of some major belly explosion, though.

And I'm pretty sure that the extra six pounds have taken residence in my thighs.  I tried to wear a pair of my regular jeans with a bella* band, and the denim around my thighs actually told me to get real and then screamed and set itself on fire.

One week and one day until we find out if it's a sausage fest or a taco party in my uterus!  My money is on sausage.  But just for this, because otherwise, I am not a fan of sausage.  The breakfast meat, I mean.  I like some sausage.

(OK, this is just taking a turn for strange, so I'm going to go to bed.)
(I'll probably dream about sausage now.  Ugh.)

The Best Thing That's Ever Been Mine

Olivia is 19 months old. She is so adorable and fun that I pretty much can't even deal with it.

There's basically no walking.  She runs everywhere.  She loves to be chased and tackled and tickled.  She laughs until she snorts and wheezes.  She has a mean dunk.

My daughter is basically indestructible.  She falls, runs into things, bumps her head...and then says whoa and carries on with her mischief.  She's tough.
Don't get me wrong.  There are tears.   Like when you tell her not to stick her face in the dog bowl, for example.  Or when you tell her that she, in fact, cannot pull Mickey Mouse out of the TV screen.

Latest Sayings:
What's That?
Where she go?
BALL! BALL! ZOMG A BALL!
Stuck, Go
Apple
Box
Whoa Whoa Whoa, WEEEEEEE!
Loves:
Pizza, Hot Dogs
Apples, Grapes, Bananas
Pasta
Her Mommy, Her Daddy
Violet
Milo and Baxter
Slides, Bubbles
Elmo, Mickey Mouse
Her hair is still working on growing. Except the party in the back, which grows like a mullet-lover's wet dream.  It's all curls at the bottom, and if you don't give her a comb over after her bath, it dries all catawampus.﻿﻿﻿﻿﻿
She's a total attention whore.  She loves to show off for people in stores and restaurants, and gives a big cheesy grin.  She's shy, too.  Pay attention to her, but don't get too close!﻿﻿﻿﻿﻿ Mostly she likes to do her own thing and figure things out for herself. And when she's done, she likes to sit by us and drink her water while we read her a book.

She points to letters on shirts and pretends to be reading them - O, O, E, E, E, E, A, R, O, O, O - pointing to every letter.  When I was sick a couple weeks ago and barfed cherries?  I was crying with my face in the toilet and pretty much feeling pathetic and sorry for myself.  Olivia came upstairs to the bathroom, lifted up my hair, and did a crazy dance.  And then I laughed.
When I think about the time I won't get to spend with her when these new babies come, my heart gets all hurty.  I can't imagine loving another baby as much as I love this one.

I generally use my iPhone camera for good, not evil.

The problem is that I'm just not very nice.  I mean, I could work on it.  But I'm not really that interested in being a better person.  I'm not mean, really, but I'm just not nice.

Sometimes I use my iPhone to annoy people who annoy me.  It's only fair.  For example, this old guy would not stop staring at me in the mall.  I tried everything.  I smiled and looked away.  I stared at him with my best "STOP LOOKING AT ME SWAN" look until my eyes dried out.  I made a strange face at him.  What else is a girl to do but whip out her iPhone and take a very obvious picture.

﻿ ﻿
On the other hand, I sometimes use my iPhone to photograph people who have done absolutely nothing to annoy me.  Except that they exist.  In this case, I have to be more covert.  Luckily, I disabled the shutter sound on my phone so that I can be a total asshole and take a photo under the ruse of texting.

I recently caught this gem at the same mall.  This lady did nothing to annoy me, aside from getting dressed and being in my line of vision: mid-fifties, tight Aeropostale sweat shirt, Ed Hardy sweat pants, and CROCS.

At first I thought the whole buttcrack tragedy made her pants appear to read "Ed Tardy."  But my Facebook friend Lauren suggested "Ed Fardy" and I think I like that better.

I should just stop going to the mall.

One Year Ago:  You Know What's Funny?  Rugs!
Two Years Ago:  You Down With RLP?  Yeah You Know Me!

I really don't know anything about twins.

First, I was bleeding like a stuck pig.  And wearing a pad every day to catch your blood waterfall does not really scream "SUCCESSFUL PREGNANCY, REJOICE!"

Next, the ultrasound people could not see a membrane separating the twins.  So I was all, Bad Things Might Happen, Do Not Get Excited, etc.

Then, I got sick.  Like...really fucking sick.  All day and all night and then I randomly threw up and then I totally understood all those assholes who hated being pregnant and I totally take back all the middle fingers I threw at your blogs and replace them with fist bumps and nods of solidarity.  Infinity. Ad Nauseam.

Now...I'm hungry.  Starving, actually.  And I feel better.  And there's a drug-fueled rave? party going on in my uterus.  And it appears that I'm growing two people in my uterus of doom and I think it's pretty much time to pull my head out of my ass the toilet and acknowledge them and their impending ejection from my vagina.

We find out on October 7 if the drug-fueled rave party in my uterus is a sausage party or a taco party.  My gut says it's a total sausage fest up in here.  I can say with 100% honesty that I don't care if we have girls or boys, but I'd fall off the table in shock if the ultrasound tech told us that I was having girls.

After we find out, project Shop Until My Vagina Explodes will commence.  And so I need your help: what on earth does one need to survive newborn twins?  I mean, besides Xanax and copious amounts of wine.  What do I buy in doubles?  What kind of stroller?  WHAT THE DEVIL?

Give me your assvice, people.  All of it.  I will be waiting with bated breath, but only because I will be shoving food in my mouth and will not take many breaks for breathing.  But still.  I'd like your advice.


I will be working on Olivia's 18 month update, since she's 19 months old today.  I spend all my extra time playing with her and it's just so hard to get on the computer when I could be looking at this instead:
--

One Year Ago: 7 Months: We Are About To Be In A World of Trouble
Two Years Ago:  The Girl Who Cried Quickening!

I seem to have gotten my appetite back.

Oh yes, I'm still sick.  And the anonymous commenter who hoped that I would blow hard chunks?  Got her wish.  You're welcome, I did it all for you, perhaps you will hate me less or perhaps not but HEY! HEY! HEY!  Gimmeh some tortilla chips!

On Saturday, I ate a big bowl of cherries and then like 3 hours later I blew hard chunks that created a scene that could have been featured in the opening credits of True Blood.

It was epic, really. I mean, I was writhing and groaning and if you didn't know that I was about to vomit you might think I was doing something naughty.  Nope. Just working myself up to yak in the most dramatic way possible.

The Sickness seems to be easing up.  Like, I only feel like I'm going to vomit 6 hours of the day instead of 24.  I'll be fine and starving and then out of nowhere WHAMMO SICKY BARFY BOO HOO HOO.  If you think that makes me sound like excellent company, then you are right!  I'm all kinds of good times.  I mean, there is totally no way that I'm reaching the end of my sympathy allowance at home and at work.  Everyone just loves my erratic behavior.

I almost murdered and ate my waiter at Chili's last week while he was trying to talk me into buying some stupid ass golf ball for St. Jude's* when I had been waiting for them to open since 9 o'clock so that I could eat some tortilla chips and salsa and all this guy wants to do is keep me from my chips and salsa and OMG NO I DO NOT NEED ANYTHING EXCEPT FOR YOU TO SHUT YOUR YAPPER AND GET MEH MAH CHIPS.

Today I ate two breakfasts (a bowl of cereal, and a bagel with cream cheese), two lunches (a can of soup, and a frozen lasagna meal), one dinner (filet mignon and crash hot potatoes, OMG) and then two big bowls of ice cream.  And snacks in between every meal.  And I felt good all day.  And I went to the OB and heard twin heartbeats and the only downside was that I couldn't convince anyone to look at my vagina or give me an ultrasound.

And I didn't even have to use my AK...I gotta say it was a good day.

Since I'm getting all the ZOMG UR YOUGE comments lately (I'm not, but you know, people are asshats), I'll post some pictures of my expanding waistline.

--
One Year Ago:  And so now I call her stinkfinger.
Two Years Ago: 15 Weeks Pregnant!  But only one week late!
*I still donated, because come on.  St. Jude's.  I don't want you to think I'm a heartless asshole.