Excuse Me Willis, Could You Please Repeat That?

Maybe it’s a little hard to believe, but I don’t really have anything to complain about.

You’re probably thinking, or saying aloud right this very moment, “Excuse me Willis, could you please repeat that?”

Except instead of Willis, maybe you say Jen. Since that is my name.

It’s so much easier for me to blog when I am pissy and annoyed. It’s so much more comical, in my opinion, when I am neurotic and stressed and exposing my Lady Business for all of Northeast Ohio.

And maybe you can seal these words up in plastic wrap (so that they are fresh when I eat them later), but right now I am just really excited. And happy...?

Excuse me Willis, Could You Please Repeat That?

Yes, friends, I think I may be getting a little less neurotic about this pregnancy, and a little more convinced that I am going to eventually give birth to an actual human being and not just a giant gas bubble (Congratulations, it’s a fart!) or a helium balloon.

That sounds fairly smug.
Is it?

I’m excited for my appointments, instead of dreading the inevitable news that woe! Bad things have happened!

I haven’t shown a medical professional my vagina in…weeks? Surely, the world is ending.

I can chat up a fertile pregnant lady without an eye twitch or sweaty brow, and I can (mostly) ignore the obnoxious remarks that would once make me seethe with anger.

I’m buying unfun things like diapers and wipes when I go to the grocery store.

I read an entire pregnancy book. And nothing bad happened!

Am considering a change in my URL – www.smugepper.com (Am not responsible for anything that comes up if you click on that link and something really disgusting happens. I haven’t checked. I’m just saying…)

So the entire point I am making here is that I don’t know if I’m a very stellar blogger when I am happy and excited. I don’t feel compelled to post more than once a week when I post my belly pic (but I will post week 14 later this week). Nobody likes a blogger who posts random crap just to post and get comments, myself included.

The only complaints I have had lately involve being too fat for my clothes, and thus having very few things to wear. And I have been promptly told by a couple readers to shut the eff up, with one person telling me that I have no right to complain about being fat, because she has PCOS and is thus fatter than I. (or me, whichever is proper.)

Since I have no problem with my ever expanding waistline, and also would like to avoid a “who is fatter, who is skinnier” compliment begging contest, I will quit complaining about my lack of wardrobe options and will just buy bigger clothes. I have no desire to be the pregnant person who complains about being fat, and even though that was never really what I was saying, I would like to no make my readers feel murder-y.

As far as we’re all concerned, I am a sacred vessel and have a beautiful bowl of jelly that is about 10% baby, 70% noxious gasses, and 20% McDonalds Grease and Easy Mac.

I make no promises to quit complaining about the VPL (visible panty line, if you live under a rock). It’s a growing epidemic.
at 10:39 AM 38 comments:

This week we had our Nuchal Translucency test, and I was pretty excited. Mostly because it involved an ultrasound, and partly because I would get a view of the cupcake and see which of these two things it resembles: 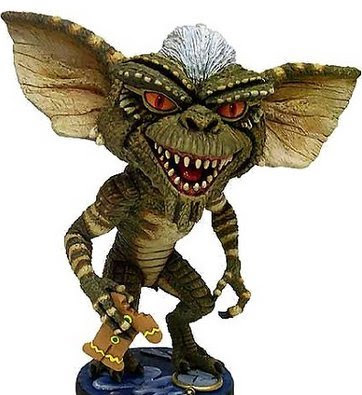 You know, Spike? The badass Gremlin. The, uh, gas causing, nausea inducing, bloody nose giving, bloat maker? That one. It is possible that I will birth a Gremlin. (That, or a giant gas bubble.) Notice how Spike bit the head off that gingerbread cookie... 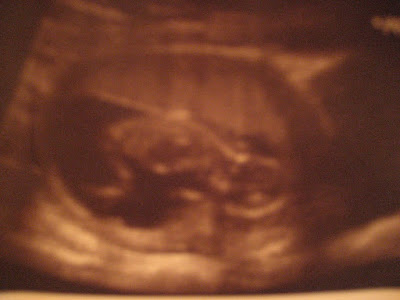 As it would turn out, we are, indeed, having a babybee. Not Spike. Good news. Please enjoy your favorite bottle of wine (the entire thing) in order to properly celebrate.

The ultrasound was so cool! Cupcake has gotten ginormous since our last ultrasound, when it looked like a gummy bear and made me feel all guilty for eating gummy bears. This looks like a baby...ish. With a really big head. And a joy for flipping all over the place while the nurse tries to get its neck measurement.

I have to wait about a week to get the test results, but the nurse said the measurement was perfect, and they just need to cross test it with the blood results. There was a student there, so I got the longest.ultrasound.ever! It was fab. (Except when the student pressed on my bladder like it was pizza dough, that was not fab.) 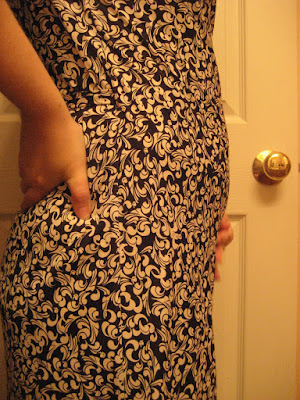 Lately I've only been able to eat teeny tiny bits of food at a time. I'll be STARVING GIVE MEH FOOD NOW! Then after a few bites I'll bee I'M STUFFED GET THAT FOOD AWAY FROM MEH GAG GAG GAG! Rinse and repeat two hours later.

Yesterday? I was so hungry that if you dared to wave food in my general vicinity, I would have probably eaten it, along with your fingers and possibly some of your hand. Here is what I ate yesterday:

So gross. And if you want to know the truth? I could've shoved, like, ten more things in my mouth before bed. But refrained since I was starting to judge myself...

Still just up 3 pounds overall, though. Not sure how!

That's pretty much all that I care to blog about. The other major thing that happened this week was that I got stuck in an elevator after one of my coworkers let a diarrhea fart, and loudly gagged the entire way from floor 5 to floor 2.

(Then I proceeded to announce to the people waiting to get on that "I totally didn't do that." Because I didn't want them to think I shit directly on the floor or anything. When I looked back at the elevator, the three people inside had their noses plugged.)

(Who farts in an elevator?!)

(Serously? Who does that? Fart OUTSIDE at least, before you are trapped in a glass cage of filthy stench!)

Back, with Belly Pics

I've been incredibly lazy since we got back from Vegas. I still kind of feel like someone should be paying me to walk around, shop, be fabulous, and eat a lot of food. And take prostitute cards from the 400 people on the strip shoving them in my face.

Vegas was awesome, and I can't wait to go back.* We briefly considered hiring a prostitute whose card advertised a $35 special, to come to our room and pack for us on the last night. Because hot damn if our feet weren't killing us! But the card was all the way across the room, and our feet hurt too bad to go get it to get the number.** Oh well. 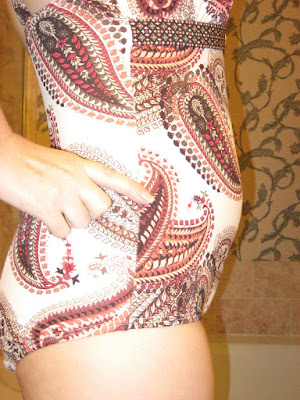 Again, in the morning. To illustrate my point about the belly explosion that occurs once I eat, here are morning and night belly pics for 12 weeks: 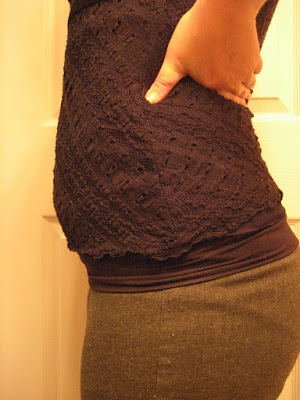 Morning Shot. Clearly, a bump but not huge. The only offensive thing about this picture is the VISIBLE PANTY LINE...I am ashamed of myself. But my thongs are all too tight and I have no idea where to get industrial sized thongs to fit big pregnant asses. (I guess I should go back to Motherhood?) 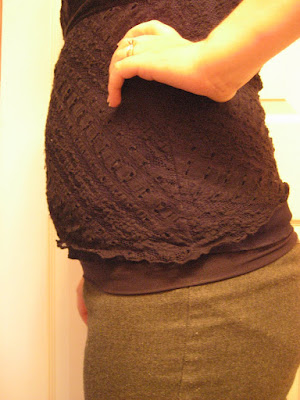 Night Shot. Hot damn, girl! Is you havin twins? What are you, like 20 weeks?!

And more VPL. I am going to have to stop making fun of people with the VPL because I am one of them. Maybe I can start a new trend?

Hey everyone! It's sexy to be too fat for your thongs and be forced to switch to granny panties that you can see through your work pants! HOT and SEXY! And not at all disgusting and frumpy!

Anyway, I have a lot of other things to tell you about, but I'm done for tonight because I have a skull crushing migraine.

I've been tagged for, like, 5 different things in the past couple months, and haven't done any of them. So if you tagged me and I was a stuck up bitch about it, can you remind me? I'll do them, I swearz.

*We can never go back, because daycare is $700/month, because I'm not sure if you heard, but apparently babies are really fucking EXPENSIVE.
** I promise. We didn't call a hooker, and we wouldn't. I think you'd probably catch the clap just by breathing the same air. And also? Breasts make me really uncomfortable.
***The Paris, I loved it.
at 7:23 PM 36 comments:

Gone Gay for Belly Bands (Or: Ladies and Gentlemen, We Have A Fetus!)

If my Belly Band was a girl, I would totally make out with it.

Since I've learned that most people don't actually know what a Belly Band is, I thought I'd post a picture of my would-be lover.

But, being the whore that it is, Motherhood Maternity doesn't have them on their website. So this is the more fancy version, the Bella Band, that you can get at Nordstrom: It is like a cami without the top part, and you can wear it like this lady is in the picture, or fold the top down, so that you don't have to button (or even zip!) your pants.

They are pretty wonderful. I have three: white, black, tan. I wish I just got three whites, but whatever. My wardrobe has quadrupled and I don't have to wear the same 5 things over and over.

In other news, I am still sick off and on. Usually, I am sick when I need to not be sick - when I have plans, or need to write 3 blogs, or when I need to actually focus on something. But it is getting better, and it's really the only thing that keeps me somewhat convinced that I am actually still pregnant and not just a Puffalump.

Today I am 10 weeks, 5 days. Which means that there will be no more of this embryo bullshit - we officially have a FETUS. A real live sort of human looking baby, with nonwebbed toes and fingers, fingernails. Fun! And, that creepy looking spine tail is almost gone.

I've gained 2 pounds so far, but am incredibly bloated. This is my ten week belly pic, taken at a flattering angle first thing in the morning before I've eaten anything: Once I get to about mid-afternoon, I'm filled with water and gas, and look way way bigger. So it looks like I'll be taking all the belly pics in the morning.

So as not to make anyone worry: we are going to Vegas this week, and I definitely won't post or comment on any blogs until we get back on Saturday. Have a great week, everyone!
at 12:37 PM 29 comments: